This article is republished from The Conversation under a Creative Commons license.

New Year’s resolutions are set with the best of intentions. But they notoriously fail to translate into lasting behavioural changes.

The new gym membership falls into disuse come February; items forbidden from the new diet sneak back into the pantry by March. Even goals to work less and spend more time with friends and family seem to fall by the wayside almost as soon as the holiday break is over and the brimming email inbox beckons.

But recent psychological research highlights several reasons why these kinds of resolutions might actually work – as well as simple ways to set yourself up for success.

A series of recent studies supports the idea that the start of a new calendar year spurs initiation of activities related to self-improvement. They show Google searches for the term “diet”, gym attendance, and use of goal-support websites are highest in January and decline month by month over time.

An additional set of studies, published recently in the journal Psychological Science by the same team, looked into this effect in more detail. In one experiment, participants asked to think about New Year’s Day as a meaningful day visited more websites related to goal-support (and spent more time browsing them) than those who were asked to think about it as an ordinary day. 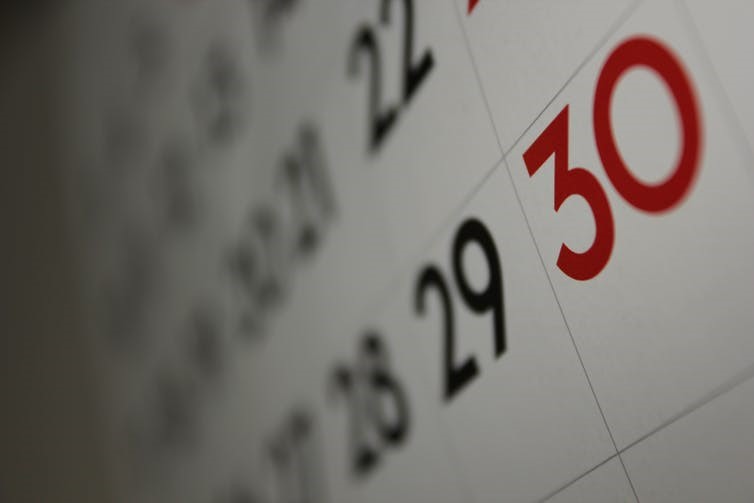 A temporal landmark like New Year’s mentally separates people from their past selves. Dafne Cholet/Flickr, CC BY

Directly speaking to the idea that a temporal landmark mentally separates people from their past selves, another experiment in the series established that framing a character in a short story as experiencing a new beginning led participants to perceive that character as different from who they’d been in the past.

Importantly, that past/present differentiation statistically explained the effect of the new beginning on how much participants believed the character would pursue a previously unmet goal. In other words, the reason why goal pursuit flows from a new beginning is because of a perceived separation from past selves.

Another reason why temporal landmarks may work to promote goal pursuit is that they spur a search for meaning in life. Research from 2014 shows people whose ages end in the digit 9 (29, for instance or 39, and so on) report more desire for having a sense of meaning in life.

It’s not far-fetched to imagine that the end of the year (rather than a decade) might spur similar soul-searching. And that, in turn, can engender goals for self-improvement.

There are several ways to set yourself up for success with your New Year’s resolution. Here are a few relatively easy, research-supported methods.

Let the calendar be your guide: the “fresh start” research discussed above shows a similar goal-boosting effect for the start of the month (with activity peaking at the 1st of the month and declining towards the 30th or 31st). It even works for the start of the week (with activity peaking on Monday and declining through to Sunday). And there’s also a boost around birthdays and national holidays.

Clearly, the calendar itself can help in re-committing to goals. From this view, “a case of the Mondays” could be the impetus to revisit the gym, shut off email in the evening, or trade spaghetti bolognese for salad. As you ring in the New Year, look around for those with whom you can set collective resolutions. PROVíctor Nuño/Flickr, CC BY-NC-ND

Don’t go it alone: setting a goal with friends can be the setup for success. One research study found signing up for a weight-loss program with friends and having that social support reinforced over time resulted in an increase from 75% to 95% in course completion. It even resulted in an increase from 24% to 66% in weight-loss maintenance, compared to signing up alone and receiving treatment not focused on social support.

As you ring in the New Year, look around for those with whom you can set collective resolutions.

Set a range: Many people are tempted (or even told) to set a specific goal. But research suggests that setting a range for a goal (planning to lose five to ten kilograms) rather than a specific target (aiming to lose eight kilos) will likely be more effective.

In research where participants were given a bag of M&Ms and asked to eat as few as possible across 25 minutes, the average consumed five. But participants who set a range goal of how many M&Ms to eat (on average, between three and eight) rather than a specific number (on average, five) reported that their goal seemed simultaneously more challenging and more attainable.

They also felt more accomplishment at the end of the 25 minutes as well as more interested in pursuing the goal again. The researchers who did that study found similar effects across a range of contexts, including weight loss and spending money.

These tactics will help you leverage the “fresh start” of the New Year to get ahead. Let the rhythm of the calendar push you, find a buddy, and set a range for your resolution. Science will be on your side.

This is the first article in our series about New Year’s resolutions, A Fresh Start. Look out for more articles on the topic in the coming days.