The most successful way to treat PCOS is by living a healthy life. The healthier you are, the better your chance of becoming pregnant. Polycystic ovary syndrome (PCOS) is the most common hormonal condition affecting women in their reproductive years.

Around one in seven women have PCOS which can cause a range of symptoms such as; irregular periods (menstruation), skin and hair changes and for some women, difficulties getting pregnant.

PCOS is mainly due to a hormonal imbalance rather than a disease of the ovaries.

If the hormone levels associated with PCOS can be reduced or controlled, the ovaries can often function normally.

Overall, women with PCOS have a similar number of children as women without PCOS.

Ricci-Jane and her partner were told they wouldn't have a baby without IVF. Ricci-Jane had PCOS, and a stressful new job and poor eating habits had taken their toll on her body. She talks about getting 'baby-fit' and conceiving without IVF. 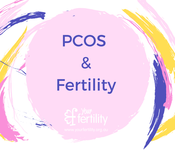 Polycystic ovary syndrome (PCOS) is the most common hormonal condition affecting women in their reproductive years...

What men and women can do to increase their chance of getting pregnant and having a healthy baby...

The Conversation: I have PCOS and I want to have a baby, what do I need to know?